Firstly most accidents (now called collisions or RTC’s) are mainly caused by road users not paying attention, with the exception of motorcycles >500cc where ‘loss of control’  is the main cause.

Many collisions are beyond an individual road user’s control, but there are actions we can take – if we are prepared – that maximise our chances of survival or minimise the risk of life changing injuries.

On (or rather off) a motorcycle it is ‘how you fall’ and crucially ‘what you hit‘ which determines the outcome – (see the late Dr John Hind’s last video). However ‘What you hit’ is an issue for all road users.

For anybody on two wheels, road furniture represents a very real unique danger, increasing your chances of dying by no less than 17 times, according to the World Health organisation. So you need at all times not only to be aware of other vehicles and the danger in particular of trucks, but also anything by the side of the road, including trees which are also potentially fatal to any road user.

Target fixation leads you to ride or drive into what you are seeking to avoid, so you need to look where you want to go, not where you don’t. Getting into routinely scanning and looking ahead helps you both plan your ride, and identify potential escape routes.

This full list of factors is called ‘Haddon’s Matrix’, but here we are just considering ‘The Event’, and its related ‘Agent‘ and ‘Environment‘, as we can’t change anything else when a collision is immediately likely, and environmental factors are what we are seeking to address. 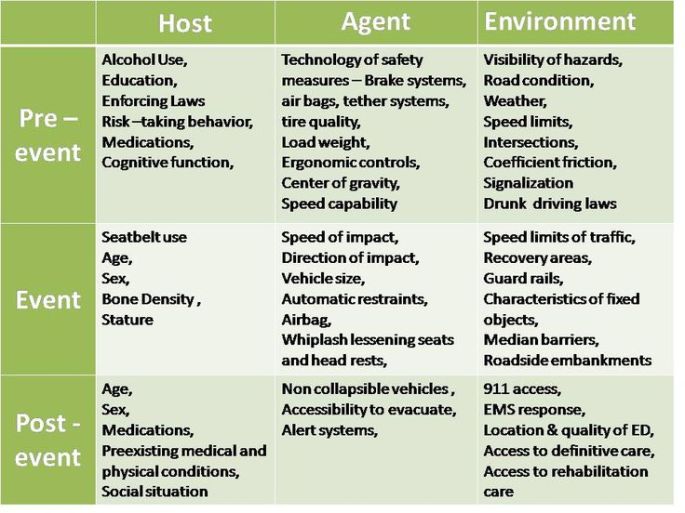 We have to avoid rapid de-acceleration as up to 56 g’s is all that is surviveable, and we are surprisingly fragile. Although, according to the TRL, in a car we usually survive front and rear impacts from 30 mph, (but not from 40 mph), a side on impact can kill at < 20mph due to a lack of crumple zones. Clearly the situation is even worst when you come off a motorcycle or cycle where even 15 mph can be fatal if you hit something solid.

Also the nature of impacts are not usually always obvious. The impact and rate of de-acceleration is the delta (difference) between pre and post collision speed. If you run into another parked car of similar weight in your car, the impact is circa half the speed as the stationary vehicle will move, reducing a 60 mph impact into approximately 30 mph delta. One car at 60 mph = two cars at 30 mph (approx – as kinetic energy is 1.5 x mass x speed squared). This, although it seems a considerable impact, is probably survivable particularly due to front and rear crumple zones.

Riders and bikes are two separate masses – riders have only flesh and blood crumple zones – so none of the above really applies. Your personal weight will have minimal effect, so this is not an excuse to eat more pies. But in a prospective shunt from behind, on your bike you can maximise your chances by being either positioned to the right or left hand side of your lane and the vehicle in front, so the vehicle coming up behind could miss you, and you could also potentially move past the vehicle in front, and out of the way. Get in the habit when you stop at the back of a queue, to watch behind until the vehicle pulls up and acts as a shield.

Riding (or even driving) into the back of a 40 tonne truck at 40 mph would be close to a 40 mph delta and not likely survivable – so even for cars it is can be ‘what you hit’. Modern 4×4’s are safer due primarily to their weight – run into one of those at 2 tonne in your small car at 60 mph and your impact is nearer 40 mph – probably not survivable – their’s would be 20 mph and not significantly life threatening.

So if you are in your car at the tail end of a jam and you see a car behind that is not going to stop in time, you need to consider standing on the brakes or better still bizarrely drive into the car in front then brake! You have just doubled your mass and potentially in theory halved the impact – although you potentially put the occupants in the car behind in significantly greater danger. You still could also be crushed if your car’s shell deforms too much.

Would you have the presence of mind and time to spot potential collisions ahead of time and act appropriately – or are you just going to find you’ve suddenly sprouted wings? Or alternatively become a Buddhist and wait for another chance?