Speed does not kill. It is only a ‘contributory factor’ in 16% of fatal accidents.

Regarding just fatalities, these are the top causes as reported by the police:-

These don’t add up to 100% as there can be more than 1 contributory factor, but clearly in 84% of fatal accidents, speeding was not a factor.

Regarding published trends for all collisions over the past 5 years, ‘loss of control’ has improved slightly probably due to vehicle developments, but ‘failing to look properly’, being ‘careless reckless or in a hurry’, or ‘making a poor turn or manoeuvre’ have all steadily increased. ‘Driving too fast for the conditions’ is stable at 7%, so no change there, and ‘speeding’ for all collisions isn’t even in the top 10. (Table RAS50002).

We are simply not tackling the primary root causes of fatalities.

In response to an inappropriate focus on ‘speed’, many speed limits have been reduced, speed cameras installed costing £ millions all over the country, ‘safety camera’ partnerships abound.

I was told at the recent Road Safety (AIRSO) Conference that more than half the drivers in the country have now done a Speed Awareness course for minor speed infractions. That’s circa 23 million courses at £90 a go, plus no doubt a healthy profit for the AA who deliver them. Drivers and riders have lost time off work and been fleeced collectively for an estimated £2 billion.

The focus has succeeded in reducing speed I think (as has it appears high fuel prices). Vehicles are noticeably driven in general more slowly than they were, but this seems to had had little to no effect, as it was never the main problem.

Strangely, those who are convicted of driving or riding significantly over the speed limit don’t have the option of a speed awareness course – which is just plain ‘nuts’, as these people clearly are likely to be the major continuing risk. Maybe this is the problem? My course was dominated by confused pensioners (my peer group) many of whom misunderstood how fast they could legally go, so they’ll probably go faster as a result. And we all no doubt spent the next few months looking for speed signs and cameras, as opposed to where we were going.

This is the 5 year rolling average change of KSI (fatalities and serious injuries) to smooth out peaks and troughs from the latest DoT report:-

Serious casualties have been decreasing significantly during the last 35  years, but are now static (marginal %age improvement), with improvement tailing off over the last 5 years. Look at just the fatalities (excluding serious life changing injuries):- 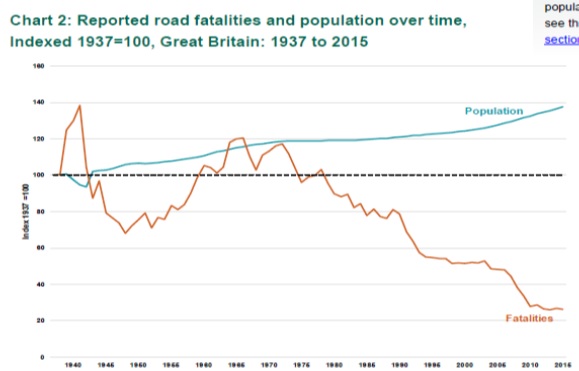 So in the last 5 years fatalities are about the same – very little improvement. The main explanation for any improvement is probably that cars are getting safer with airbags and ever stiffer crash test requirements. This seems to be confirmed as motorcycle fatalities are actually up 8% in 2015. Mile for mile you are now 57 times more likely to be killed on a motorcycle than in a car.

It could be argued that reduction in speeds has also improved the outcomes, and no doubt that is what the ‘speed lobby’ will claim, but there is no evidence that I have seen to support this. And it’s I believe likely to be far more effective tackling the primary causes of fatal collisions, rather than accepting the worsening situation and trying to minimise the impact (no pun intended).

You can’t argue that speed awareness is reducing the impact speed and severity of collisions, as the number of SKI’s is now static.

The blind focus on speeding to tackle fatalities has failed. Speeding related fatalities hit a low of 194 and 12% in 2012, but show an increasing trend, up to 244 and 16% in 2015. The situation is now significantly worse.

We are all very lucky to have world class emergency services who seem to have been steadily improving survival rates, which again may be a significant factor in reducing deaths.

There are also separate figures included this year from the NHS (not the police) and they show deaths and serious injury admissions from road collisions (MAIS3+) have remained largely unchanged for many years.

As the ‘Speed Awareness’ program has clearly failed, there is talk now of ‘zero tolerance’ for speeders, which is very unlikely to help either. The huge damage already done to the relationship with the police will suffer further. Before speed cameras the police applied common sense to speeders, usually only prosecuting when the speeding was dangerous, and lecturing drivers instead. I believe it worked.

12% of fatalities were actually caused by vehicles within the speed limit but still travelling too fast for the conditions.  And this is even after the reduction in speed limits on very many ‘high casualty’ routes, which I suspect has caught many if not most of the speed awareness attendees. There is no consistency in the application of speed limits which look almost random at times. We have some 30 mph dual carriageways and a 60 mph limit on most single track roads. Ridiculous.

22 million drivers and riders have been lectured on the evils of speeding, misled into believing that keeping within the speed limit is the single most important thing to do, and will help to keep them and others safe. What a misleading wasted opportunity of biblical proportions.

40% of fatalities – two and a half times more than the 16% who were speeding – were caused by a failure to look properly or the miss-judgement of another’s path or speed. Twice as many fatalities as speeding (32%) were caused by the driver/rider losing control. 20% were careless, reckless or in a hurry, 14% were making a poor manoeuver, and 13% were either drunk or drugged (Table RAS50007).

(NB The combination of both speed and losing control contribute to less than 1% of collisions).

The opportunity is there on ‘Speed Awareness Courses’ to present a truthful picture of what actually causes collisions and how to avoid them. Primarily we all need to take more care and pay far more attention, avoid distractions, concentrate.  The fact that you end up on a speed awareness course is because you weren’t paying proper attention!

The key factor of ‘reaction times’ is not stressed. TRL research shows reaction times at least double if you’re not paying attention, increasing stopping distances by 30 foot at 30mph, 60 feet at 60mph, and worse case can be 6 times longer if you can’t recognise a hazard for what it is. Drivers and riders also need to be taught properly how to control their vehicles as ‘loss of control’ is the primary cause of twice as many collisions as speeding, despite all the features on modern vehicles.

Standards of driving are noticeably poor. 55% of drivers fail their tests which is appalling (30% of motorcyclists fail) – so many poor drivers inevitably get through by chance eventually, which may also be a major factor. Training in general needs totally revamping to make it more effective. Vehicle control needs to be taught properly as does such skills as overtaking and driving on a motorway which amazingly are not covered.

There are doubtless often early warnings via minor collisions by which the insurance industry could identify those who need further training, before probably an inevitable ‘big one’.

We need to abandon the very misleading ‘Speed Kills’ strap line, focus on the need to pay attention, train road users properly and significantly increase the levels of traffic policing as RoSPA have recently proposed. Back to ‘Think’?

A new course is needed on ‘Collision Avoidance’ based on data and solid theory, not hysteria, on the cause of collisions, the dangers of losing control and how that can be avoided, and the importance of always paying attention stressed. This could be applied primarily to drivers and riders who have collisions and serious offenders, not marginal speeders who present at best a very low risk.

We have collectively allowed ourselves to be hijacked by the anti-speed lobby and misleading populist newspaper stories, and the Government taking an ineffective soft self-funded option rather than dealing properly with the root causes of road fatalities.