Firstly many thanks for Alan Bussell for allowing us to share this with you.

Allan is a very experienced biker and has done as much advanced training as he could pack in from the usual suspects on the roads and track, and was booked to come on one of our track training days for road riders on 30th June, after winning a competition in Motorcycle Monthly.

Sadly he’s just had an off and very luckily escaped with just a few bruises, but the bike is probably a write off. Could have been far worse – note a lack of trees and lamp posts. We’ve known that ‘loss of control’ is a major factor for some time in big bike injuries (>500cc) from the accident statistics.

‘This shows how easy it is to come off.  Gentle acceleration as I was moving out to overtake an elderly couple.  They’d seen me and had kindly pulled over for me to go (no need to because the road was empty). When overtaking I try to show the same respect (if not more) than what was shown to me so I go past without having the engine screaming. 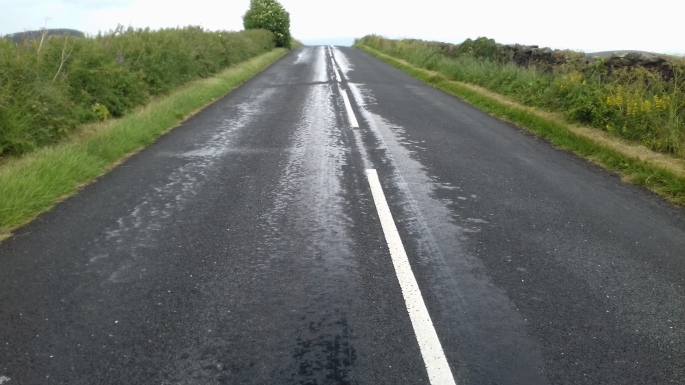 The conditions were obviously damp so gently does it but when you hit the slippery tar then any power going to the back wheel just spins up the back wheel and before you know it I’m sideways on motocross style then it bites when it hits the grippy stuff.  This is the result’.

The problem with modern bikes is even tourers have very powerful engines and very light flywheels, so when the rear wheel loses traction, if the throttle has been opened wider than it needs to be, then the revs rise almost instantly. If the tyre does then find a grippy piece of tarmac it’s a complete lottery what happens next, depends on how far sideways you have got and in which direction, before some grip is found.

This is the classic ‘high-side’ if you are banked, but even a seemingly flat straight road can have enough camber to force the bike sideways. White lines are better than they were but can still be treacherous, and a badly maintained road where all the aggregate has worn off just leaving the tar can be like ice, particularly when wet.

It is worse in a higher gear as you get so little response from opening the throttle wider, so may not realise how far it is open, which is why you should always consider which gear to be in (and change down before taking).

Traction control should have kept Alan upright, but the advice is not only to open the throttle slowly and smoothly, but also never get it further open than you need, rolling it open steadily as the revs increase, ‘dragging’ if you like, the tacho needle around the dial.

Modern injection systems are ‘ride by wire’ with no direct connection between the twist grip and the throttle butterflies (which restrict the flow of incoming air and fuel – or a second set of butterflies controlled by the computer on older bikes). No matter how far you twist the throttle, at lower revs the butterflies won’t open much as the engine can’t digest any more fuel efficiently – until the revs rise and the engine management system then opens them more and more as the revs build until it reaches a point set by the twist grip, when the butterflies stay partially open dependent on how far you’ve turned the throttle.

So if the throttle is fully open at lower revs, if the rear wheel loses grip the engine will instantly hit the rev limiter – peak revs and peak power produced as the tyre tries to grip again. When the rider instinctively reacts and shuts the throttle the bike will likely be sideways when the tyre grips again, which often then throws the rider off.

So the advice is to use your gearbox and consider changing down before overtaking which means the bike is more responsive, twist the throttle gradually as the revs increase, so if you do lose traction then the engine revs will only rise so far, giving you a good chance of saving it.